Jim McCallum Chairman of the Elgin OGS branch was granted permission by Chris Duff to do the following post. We acknowledge the "Original source" - letters lodged with the National Archives of Scotland in Edinburgh. (A few years ago, a professional genealogist reviewed some of the earlier correspondence in the NAS files relating to Murison family matters in the 1700s and these were published in a family history magazine.)

LETTERS FROM CANADA TO SCOTLAND FROM AUGUST 1873 TO MARCH 1881.FROM JAMES MURISON IN ELGIN COUNTY, ONTARIO TO HIS BROTHER, FRANCIS MURISON, IN ALVAH, BANFFSHIRE, SCOTLAND.

My Dear Brother and Friends,

You will at this time be thinking me very careless for not writing – well, I will not make any excuses farther than that I had not much convenience to do so for some time past.  However, I am thankful to God to be able to say we are all in good health, hoping through His goodness this will find you all in full enjoyment of the same great blessing.

I did not find work at Toronto.  I believe I would have got a station on a line that runs from Toronto to the north if I had stopped there or now as a good extension of it was opened last week.

When I left Toronto I expected to get a job at Paris Station on the Great Western Railway, but I was misled on that.  We all went to that place, as James Garrow got work there.  I did not stop but a week there when the Station Master kindly got the job for me that I have now.  I am in charge of the oil store at this station.  It is the chief station on this branch of the Great Western and the stations along the line get their stores from here.  It is about 200 miles long.  There is about 500 belongs to this company.  This portion of it is not opened for passenger traffic yet, but goods trains have been running on it for some time.  The most of the traffic is between Chicago and New York as it is the shortest route between these two places.  You would wonder at the quantity of swine that comes from the western states for New York.  There will sometimes be thirty trucks of them on a train and they are double-decked and about twice as long as the trucks at home.

My wages is One Pound 16 Pence per week and I got the promise of a better job when the line is fully opened.  However, we can be pretty comfortable on what we have.  House rent is the worst here as there has been such a rush of people to this place.  They tell me the town is nearly doubled in size since two years, but house rent is looking down now as there is a great many new houses put up and some people are leaving the place when the lines are getting completed.  There is another line which is making same times as this one and it runs almost alongside this one all the way, so you may judge of the traffic by rail between the western and eastern States which runs through this part of Canada.

It is only last Tuesday that my family came up from Paris, as James Garrow has work there and little James was working in a factory at $3 per week and was boarded.  But we are together now with the exception of James Garrow.  He stopped behind the rest a few days as his Master was from home.  He is to get a job here at the railway shop.  He will have One Pound 16 Pence to begin with and it will be a steady job, so the one house will do with us both for some time at least.

Jane came here about a week after me.  She is with the man that is Superintendent of the line that I am on.  She has $8 per month that is equal to Ten Pounds in six months.  Servant girls are in great request.  I don’t know how many was looking after Jane – one man would have given her Twelve Pounds per month.  Men are by no means scarce here.  I know of blacksmiths who cannot get work at their trade, yet some get pretty good wages.  $2 to $3 per day and navvies pay is a dollar and a half.

There is a great many English around here.  This is said to be one of the mildest places in Canada.  The winters are not so severe as it is north.  We are in almost the southmost part.  We are 6 miles from the lake and there is a boat crosses to the States on the other side.  We are fully 100 from Toronto.  This has been a very pleasant summer and fine crops.  I have felt it as hot in Scotland but of course only for a short time.  The weather is steady here.  There has been some thunder storms that I never saw equaled in Scotland.  The lightening and thunder scarcely stops during the time.  It lasts about four hours at a time and is the longest I have seen it rain.

I have had two letters from brother John.  They are all well.  He has and is still working in the paper factory.  He is always full of the lead mining and he thinks it would yield him something handsome.  He has found lead, but not in paying quantities yet as he has not got the proper depth.  He wishes me to go and see him and see if I would go in with the mining, but it will be next spring at any rate if all is well if I go then.

There is some fine farms in this vicinity, but as a rule they are badly farmed.  Were they farmed in the same way in Scotland it would scarcely yield anything.  They say farmer has the best life of any, but it is not good getting into a farm in this part.  It is 200 or 300 miles farther north where the free grants are to be had.  The only way that a man with small means can get into a farm here is to rent one.  It can be rented for $1 per acre, that is 4 Pounds.  There was one fine old Scotsman told me that he has retired from farming and is living in the town.  He has 400 acres let to in 4 farms.  He said one of his tenants got on so well that he bought a farm of his own in the course of 5 years.  So one with a knowledge of farming and a little capital could do well at farming.

So far as I can discern, the working man has a far better chance here if he is steady.  There is as much drunkenness as there is in Scotland.  Drink is so cheap.  I am sorry to say I see as many of Scottish drunk as of any other.  There was a man called on me who was a station master on the Buchan branch of the G.N.S. Railway.  He is working as a navvie.  He showed me his pay ticket for about 10 Pounds for one month work.  But after the pay he came round about the station beastly drunk for a few days.  He has been here four years.  His wife and family are still at home and I do not think they will ever get much good of him.

Ironside that was at Portsoy is gas manager at London.  It is 15 miles north of this.  The main line of the G.W. Railway runs through it and his son who was ticket clerk at Portsoy is clerk to the railway superintendent there.  I have seen him a good many times.  He is a fine young man, but I have not seen the old boy yet.  He certainly has got on well.  His income is not short of 20 Pounds per month.  London is a large city.

I have little doubt but the double-furrow ploughs would work here, but I will not mind them in the meantime.  I could not say if the small tine mill would take.  They have a pretty light horse mill that threshes and dresses the grain at same time.  I will send you a paper in which you will see the market price of things.  Cows such as any of yours would cost from $15 to $20.  That is 3 to 4 Pounds, so that will give you some idea of what meat costs.  The best of it is only 3 or 4 pence.

Please let the friends know how we are and I will write them soon, and write me as soon as you can as I am anxious to hear how father is.  And send me a Banffshire and People’s Journal.  We all join insending you our best wishes and kind love.  How is Grandmother?  Is she still with you?  I must have done in the meantime.

P.S.  Mr Burgess sent a journal of the voyage to Mr Anderson, but it had not been received.  He is to send it again as he had a copy.  Perhaps I will do some more to it what my experience of the country is.

END
Posted by Unknown at 3:42 PM No comments:

A query was received by a researcher who is looking for descendants of Captain William Francis and Catharine Bowlby through their only son Thomas Francis who was married to Electa Waggoner. Permission was granted to Elgin OGS to make this post.

The researcher has been working on his murder for some twenty years with the intention of placing a plaque at the location of his murder. Ontario Heritage Trust informed them at first their subject was worthy of a plaque but by the time they submitted the application someone different was in charge and were turned down. North Erie Shore Historical Society in Selkirk has agreed to pay the difference and they have a plaque on order which will be placed at the entrance to Selkirk Provincial Park and dedicated on Sunday October 19th at 2:00 pm. They have attached the proof of the plaque below.

Recently when talking with Daryl McTavish of Fieldcote Museum in Ancaster who was involved with the 299th year commemoration of the Bloody Assize and hanging of the eight men on July 20th 1814 at Burlington Heights,  he has suggested if we could find and invite descendants it would add greatly to what we are doing.

We have traced ten of the twelve children and find there is a good possibility there may still be descendants in Elgin or Kent County, though a lot of the children and grandchildren ended up in Michigan.

Wondering if anyone there has knowledge of any of the family members or might better know how one might find them.
Sincerely
Helen Bingleman
P.O. Box 222
VITTORIA, ON
N0E 1W0
519-426-1729 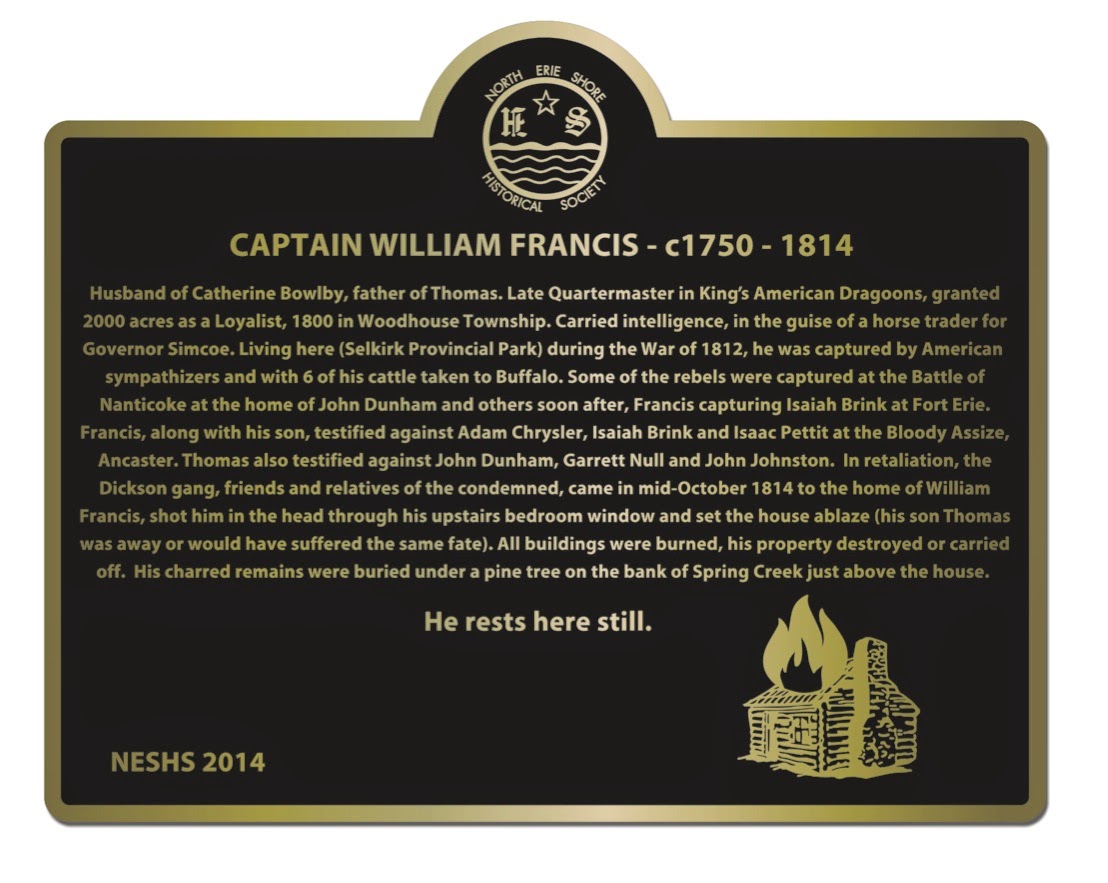 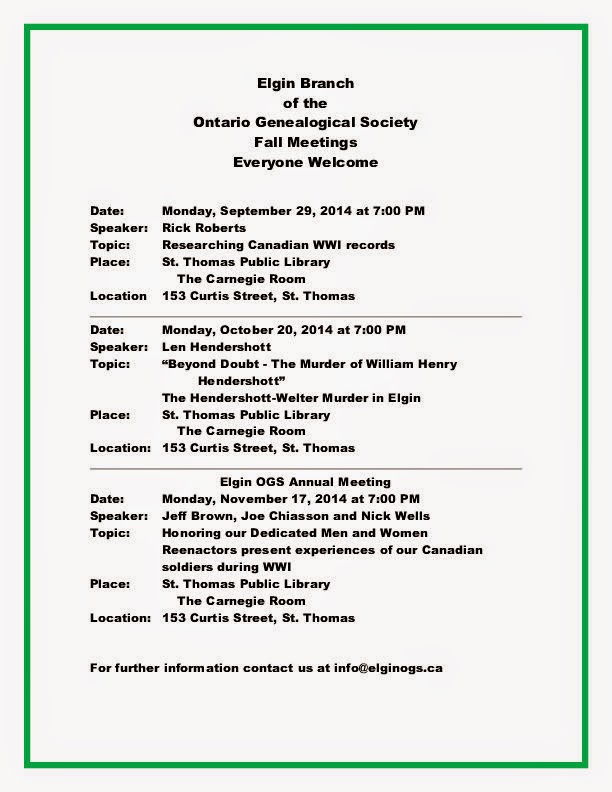 Posted by Unknown at 5:10 PM No comments: Posted by Unknown at 5:06 PM No comments: 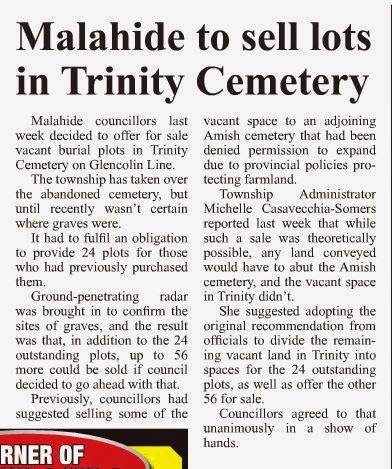