As a continuation of the project resulting in the book "Age Shall Not Weary Them", giving information on the men who gave their lives during the First Great War from East Elgin, Elgin OGS is publishing at least four more volumes on the men and women who served in that conflict from the Townships of Bayham, South Dorchester, Malahide and the Town of Aylmer. Much of the biographical material has already been collected, but photographs are needed. A list of the people featured in these publications will be posted to the Elgin OGS website: http://www.elginogs.ca/WWIphotorequest.html Anyone with photos (doesn't have to be of the person in uniform) is asked to e-mail Jim McCallum at jmccallum@rogers.com
Posted by Jim McCallum at 1:48 PM No comments: 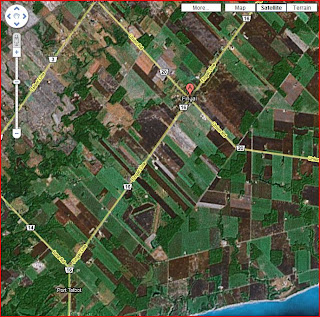 The #4 Bombing and Gunnery School, 34469 Fingal Line, Fingal, ON was in operation from November 1940 to February 1945. This unit was one of 105 Canadian and British Air Schools that were a part of the British Commonwealth Air Training Plan in Canada. There were 50 temporary buildings, a large drill hall and 6 steel framed hangars. Three hard surfaced runways were laid out in a triangle. Bombing targets were located at Dutton, Melbourne, Frome and Tempo. There was a Marine Section at Port Stanley and bombing and gunnery ranges along the north shore of Lake Erie. During this period over six thousand non-pilot aircrew graduated from this school. These students and their instructors came from several countries, mainly United Kingdom, Australia, New Zealand, Norway, Free France, United States and Canada. Nineteen men lost their lives due to accidents involving airplanes and their names are listed on a commemorative plaque at the entrance to the old RCAF site. The RCAF abandoned the site in June 1961 and the Federal Government sold the site to the Province of Ontario in September 1965.

The Ontario Ministry of Natural Resources and the Elgin County Stewardship Council jointly manage the Fingal Wildlife Management Area (FWMA). At present, 390 of the 720 acres at the site are devoted to agriculture, employing conservation farming methods and the remaining space is managed for wildlife habitat and human enjoyment.

In September 1992 the Kettle Creek Conservation Authority started a project to collect funds to erect the memorial plaque at the entrance and also as part of that project, to provide an interpretive walking trail and thus the War to Roses Trail was established in 1994. The 1.5 km trail follows part of the old Air Force road system and combines nature along with history and takes about 40 minutes to walk. We can all thank Ian Carmichael, Gord Longhurst and Lorne Spicer for their efforts in constructing the trail. As we remember our history and enjoy the sites and sounds of nature around us, the War to Roses brochures ask us to “Please remember the hiker’s creed: take nothing but photographs; leave nothing but footprints.”
Posted by Bruce Johnson at 2:05 PM No comments: