The Upper Canada Land Petitions can be an important source of information on early Ontario ancestors. The UCLP are Land Records for the 1791- 1841 Upper Canada period of the now Province of Ontario. The Petitions were originated by early settlers requesting grants of land in the new British Colony which was settled following the American War for Independence. The petitions of these early Canadian settlers often give useful historical and genealogical information about the settler sometimes indicating children or parents and previous service to the Crown.

The petitions to the Lieutenant Governor in Council are kept by the Library and Archives Canada (LAC) and the images of these petitions are now online at the LAC website. The petitions are arranged in Chronological order and a searchable index makes it easy to locate an ancestor’s petition.

The searchable online index is located at:


Researchers can search by surname, given name or place. Here is an example of a search for a settler in "Malahide" Township, Elgin County. with the surname "Whitesel*"

The results of this search provide a list of “Whitesel* persons located in Malahide Township, Elgin County, Ontario whose petitions are available for viewing online. (Note an * can be used for wildcard searches which in this case brings up two occasions of the name “Whitesell.” 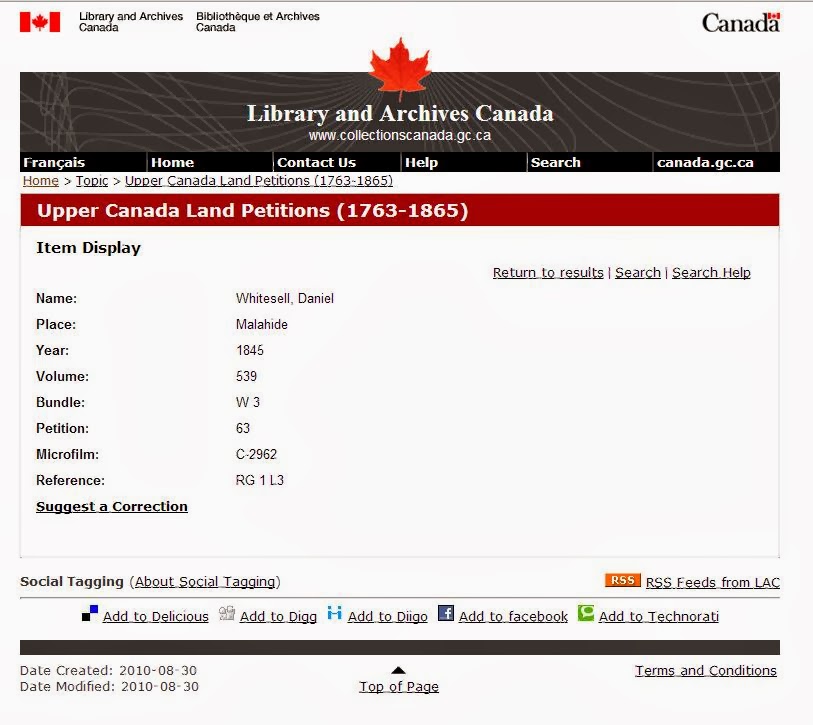 Unfortunately at this time there is no way to link directly to the the petition from this window so one must next go to the actual images which are located at:

Select the above referenced film for Daniel Whitesell by clicking on the indicated Film C-2966 which is item number 314.

The microfilm can be viewed in PDF or JPG format. Now comes the tricky part. Some trial and error is required but with time new researches will learn how to quickly locate the desired record.

Experienced searchers often “bracket” their searches rather than just going page to page from the beginning. The Bundle Number will be at the very bottom of the page. On the first page we see that there are 1033 pages on this film. Sounds like a big job but if you arbitrarily pick a page one third to halfway through say in this case to page 500 you will see at the bottom of the film that you are indeed at W Bundle 3 but at Vol 538 - and only at petition #17. So then try something like page 800. Too high. Finally one closes in on Petition #63 for Daniel Whitesell at page 779.

The petition covers 6 pages - Petition 63 to 63f.  In reading the petition and accompanying affidavits a wealth of information about this early settler can found which is not found in any other source. Daniel was a son of Andrew Whitesell, a UEL Loyalist and was late filing his claim because of his inability to write due to the "losses, privations and sufferings in support of the Crown during the Revolutionary War."

"The petition of the undersigned, Daniel Whitesell of the Township of Malahide in the London District and Province of Canada, Farmer - son of the late Andrew Whitesell and Enrolled U. E. Loyalist, ... Humbly showeth. That your Petitioner was located by the Honourable Colonel Talbot, soon after the commencement of the Talbot Settlement, upon a Lot of Two Hundred acres of Land being Lot number Eighty - seven South on Talbot Road East, in the said Township of Malahide under the expectation of receiving a firm grant from the Crown for the same as being the son of an Enrolled U. E. Loyalist. That your petitioner appeared before the Quarter Sessions and obtained the usual Certificate previously to the first of January 1843. That your Petitioner was not aware that the Statute 4th & 5th Victoria, Chapter 100, could affect or do enjoy with such his acknowledged right to two hundred acres of land, and humbley beg leave to suggest that his is no New Claim to Land formed upon any negotiation or order of the Provincial government but rather as your petioner was always led to believe, and fondly trust that he may still be provided the [thansmeilt ?] the sentiments connected with such belief to his children, along with the original Free Grant from the Crown for his Farm and Old Claim a record granted the Loyalist and their children by the late Majesty George the Third of pious memory, for their loyal attachments losses, privations and sufferings in support in the unity of the United Empire of Great Britain during the American Rebellion deprivations to which your humble petitioner's inability to write his ...

Wonderful information and well worth the effort to locate.

The pdf document can be linked to your Ancestry web site as I have done and the Family Search wiki.

For further information see Discovering Your Roots in Elgin County.

Posted by Bruce Johnson at 7:20 PM

Awesome post, will help me know how to do it in future. You should do more of these.